Most would say that having extra space…clean space is a good thing.  It keeps the mind clear, the heart clear, makes life much more peaceful.  Yet, I discovered yesterday that “extra” space is not necessarily a good thing.  Yes, I love the clutter free life and can feel the difference when things creep into my space but there is this other side to space…a sense of temporary that doesn’t feel so good.  I’m about to share some pictures of my space…my real space at home.  I’m a little nervous about doing it in such a public way but here goes…

Rearranging the living room was one of the first things on my list…fairly easy task, right?  Just drag furniture across the room.  Not much to it.  Here’s the first part of the process… 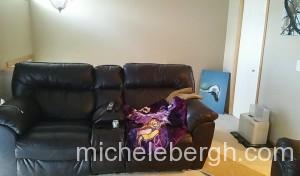 Loveseat in it’s old spot.  I put it here originally because it “fit” perfectly along the half wall but it’s a big piece of furniture and really needs more room to breath.  It’s football day so the Vikings fuzzy blanket is out! 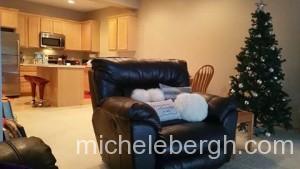 Chair in it’s old spot. What you can’t see is the cord that ran from the chair, across the floor and behind the couch to operate the electric recliner feature. I had a rug over it so people wouldn’t trip but it always bothered me. Always getting moved around, it wasn’t flat so it stood out, etc. 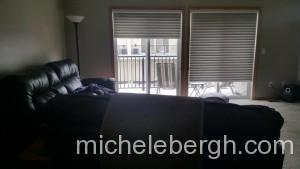 Loveseat and chair in new spot. Sorry for the dark image. 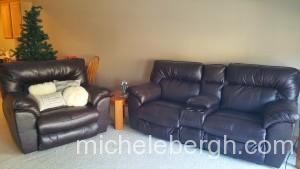 Better picture from the other view. Not complete but I like where they are in the room and how much it opens up the space. 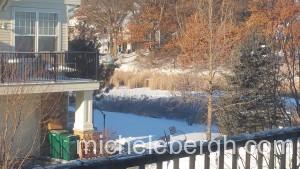 New view from couch. That is a lovely pond and there are all kinds of wildflowers that pop up in the summer months. 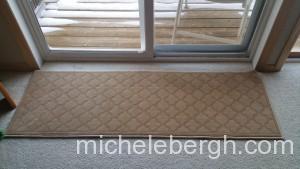 Rug that previously covered a cord now has a new home that makes sense. What was there was not so great. This is good. 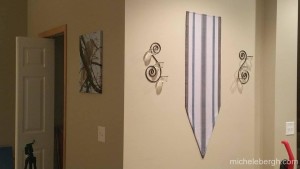 One view from the couch. It’s there thanks to Linda Watson who made that weaving for me and helped me hang everything in that space when she was here for a visit a few months ago.  This along with a few things in two of the three bathrooms and three canvas images of my grandkids were literally all that hung in my entire house after a year of living here.

So those are just a few images and what’s more important here is the growing awareness I have that, while I have furniture in these spaces, the lack of real decor…the lack of much of anything on the walls…has such a strong sense of temporary…like I just moved in or I’m in transition.

Sitting in this space, a conversation cropped up with a friend.  Her new boyfriend sleeps on an air mattress…okay, an air bed…not sure if there’s a difference.  She says he told her it’s because he never knows when he might want to just get up and go and she said she can completely relate to that feeling because she has it too.

And (I note to myself) she also has a regular bed.

I would love to travel more and love being able to just get up and go…and I also have a bed (I note to myself)…a heavy bed, in fact, and king size.  It’s not my deal where someone else sleeps…I just have a hard time comprehending someone in their late 40’s sleeping on an air mattress on a regular basis.  But that’s because of my own shit, I’m sure.

Along with that conversation, the rearranging of the living room…taking pictures (which I said I wasn’t going to do but then I remembered my mom telling me years ago, to really assess a space you have to take pictures because the brains tricks our eyes into not seeing things for how they really are) gave me a different view of my space…all of this led to a complete meltdown.

I asked my husband what it says about a person who doesn’t hang things on the wall…who doesn’t really decorate their home  He said kindly it speaks to their lack of ability to make a commitment…a sense of temporary…just like I thought.  We talked about why that would be and how it all relates while I sobbed and could barely speak.  He was kind and patient while not really understanding why it was so emotional for me.  He said they were just pictures and they aren’t permanent and it’s okay to see them as not such a big deal.  I tried to explain that wasn’t exactly true.  Yes, it’s true they aren’t permanent BUT if you go to move them, there are nail holes to patch, paint to fix, etc. – they damage the space.  There’s something about that damage part that really gets me.  It isn’t just a wall that can be fixed…it’s damaged.  And even when you patch and paint…sometimes – most of the time – you can still see the marks.  They show up all over this place from those who lived here before me.  I am aware of them every.single.day. That is what feels more permanent to me…the marks they leave behind, long after they’ve been removed.  They are like scars.

“A moment’s insight is sometimes worth a life’s experience.” ~ Oliver Wendell Holmes, Sr.

Then he moved into Mr. Fix It mode.  Men like to fix things.  They like to take care of their loved ones, for sure.

I let him hang these… 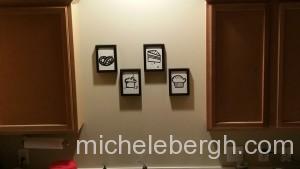 Kitchen pictures above the sink.

Do I love them?  I think the pictures are really cute and I definitely wanted them in somewhere in my kitchen and that was one of the spaces I looked at…the pattern he created (all on his own) is cute.  I don’t know that I fell madly in love with them there BUT I did fall madly in love with his desire to support me and that is what I will think of every time I see those hanging there and that is a beautiful thing.

Besides, there are a bunch of holes and pen marks behind them now so they have to stay.

Where will all this land?  I’m not sure. He tried hanging everything in my pile of pictures I have that I like but I resisted kindly to any more work.  I was spent emotionally and just not up for anything else.  I will keep moving along allowing the emotions to surface and be looked at…I’m not sure if the temporary piece is fully mine or if it’s the underlying issue of the damage it leaves behind to hang something…I feel like the latter may be the case and perhaps it’s even deeper than that…we’ll see what unravels…

Read more about the beginning of my SoulSpace journey here and here.