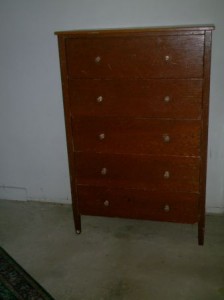 For the past several months, my daughter’s been asking for a dresser.  She’s been using a different type of organization system and now wants to switch.  I’ve been hesitant because she’s been looking at one’s that are a bit spendy and I really felt her tastes would be changing for the next couple of years and didn’t think it made a lot of sense to spend a lot on a style that may be temporary for her.

After all these months, I told her it was time to get a dresser.  I told her I couldn’t spend another day listening to her talk about it as we laughed about how much energy it was taking up.  I shared with her my concerns and she actually said I was right on and we should go in another direction.  She went on craigslist and in a very short time had found a dresser that would work well for her needs, looked a lot like what she wanted and could easily be painted white like she wanted it to be.  AND it was only 8 miles away. BONUS!!

She had to head to work so I called the ex to see if he could help with his truck.  The people selling the dresser used to live in the same town I grew up in…went to the same high school…was just a few years older than me.  We knew some of the same people.  Every time I think I shouldn’t be amazed anymore by how small the world is, I’m still amazed.

We bought the dresser, loaded up the truck and headed home.  Now there is a dresser in my garage, ready for sanding, painting and maybe some new knobs.

Not buying her a dresser sooner cost me:

What’s been nagging at you lately?  Are you willing to address it today?