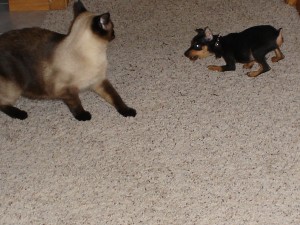 I can’t believe that it snowed yesterday! It’s the second half of April and a time when more colors than white and dirt should be showing up outside. It was such a shock for us. Winter seemed so long and I think we are all ready for spring.

While there was nothing we could have really done to prepare for the change in weather, one thing is certain. We could choose how we responded. Some people complained. Some people joked about it. I chose to build a little snowman.

When I took our dog, Sid Vicious (the girls named him and he is about 8 pounds of pure terror, if that’s possible and he’s pictured here as a puppy with my cat, Shanti), out to do his thing; I noticed that the snow was the kind that you could easily form into a snowball and I started making small snowballs and throwing them at the garage. I can’t remember the last time I did anything with snow. It was fun! Then I decided to take those snowballs and make a mini snowman on the railing of the deck. He was so cute…until the next time I took Sid out to do his thing where I found my little snowman on his side and half melted. I just sighed and the thought that entered my head was:  this too shall pass.

Much like the 8 pounds of pure terror, preparing for the unexpected is an oxymoron. A pure contradiction. If you don’t know what is going to happen, how do you prepare?? But one thing is true:  this too shall pass and life goes on.

Life is full of unexpected experiences. Some good…some not so good. I love all the good things that happen…increases in my business (three record months in a row), getting clarity around what’s important to me (family, friends, growth, expression, time for play, having fun while working, less “stuff”), and some really great resources for managing my life that have crossed my path (getting an assistant, groups like Women in Networking and Rich Chicks as well as Masterminds & Mentors, To Done Lists – watch for more on this). The bad things (not actually graduating after all – watch my blog for more on this, owing Uncle Suga some big time money for taxes, the cost of gas)…well, who enjoys those? But I know that life continues and the good outweigh the bad and life rocks!

I am having more fun than I’ve had in years. I’m expressing who I am fully without apology or hesitation. More than anything in my life, I feel this is what has made the difference in my ability to cope with things I don’t like that cross my path and in my ability to create and experience lots of really cool stuff too. Will you join me in doing the same?