How to Know You Are In the Flow 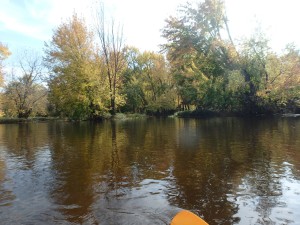 Several year ago I was in an accident. It wasn’t my fault. I had some soft tissue damage and the guy’s insurance company offered me $1,500 to “settle.” I had no idea what that meant. I’d never been offered money before from an accident and I’d been in a few. So I asked an attorney.

Turns out it’s pretty common practice (unless you’re dealing with State Farm who will try to keep every nickel they have) for most insurance companies to offer you a small sum so you release them of liability in the future.

It was a tough time for me financially but I didn’t really care about the money and yet I wanted to be treated fairly. After understanding what fair was, I did some calculating of my own and counter-offered with $2,500. They said no. I said I’d wait and see what happened.

Every few months I’d get a letter from them to say they weren’t accepting my counter offer and were still reviewing the case and I’d ignore their letter. About a year into it, I got another one.

I threw this one in my backseat and didn’t even open it. I was tired of seeing them and frankly didn’t care. One day, I decided I should throw it out…get it out of my car. I grabbed it and went towards the garbage can and then had a nudge to open it.

But as open as I thought I was, it’s not lost on me that I was not as open to prosperity as I thought….I  almost threw out that letter and missed their offer and I waited two weeks to even open the envelope.

I definitely feel like I was being watched over and that money sure came in handy but was I in the flow? I didn’t think so. If I was, I would have opened my mail in a timely manner and seen that offer.  I can think of many opportunities for abundance I have missed or come close to missing because of my resistance to abundance.

All of this got me thinking…and researching, which I love to do.  I started checking out other articles on being in the flow/going with the flow…like Danielle LaPorte’s article and this one on Huffington Post’s site by Dawn Gluskin and Kathy Kruger’s article on Tiny Buddha and this one on Indigo Intentions.

Here are some the key points I took away…

I realize now that it’s an easy shift of thought/perception to understand that, while I “almost” missed an opportunity, I didn’t.  I trusted that all was right in the world and it appeared in it’s own timing, not mine.  I was divinely protected and guided every step of the way.  I always am.