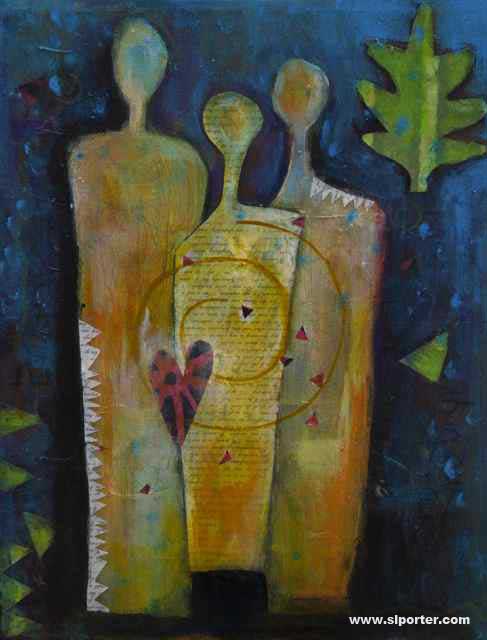 A guest post from Susan Lobb-Porter, a gifted artist.  A big thank you for sharing herself with us.  Please be sure to check out her site using the links below.

I stopped off at Safeway on the way home today. Picked up a couple little veggie pizzas, three tomatoes and a bunch of kale.When I went to check out, I stood behind a young man. He was tall and thin, probably the same age as my son, late twenties. He smiled at me as I took my place in line and moved his groceries to make room for mine on the belt. He had four liters of non-diet Coke–they were on sale, he said, something from the deli and a half gallon of watermelon juice.Watermelon juice? He told me it was delicious and the best thing for quenching thirst.We made polite chit-chat about the weather. Hot. Couldn’t believe it was October already. Soon we’d be complaining about the cold.It wasn’t long before an elderly man took his place in line behind me. The two of us chatted with him as he unloaded his cart. Parsnips and turnips, a bit of stew meat and carrots. He held up each item, explaining what it was. For a crockpot meal, he said. One he cooks every two weeks for his daughter and her family. His contribution to the household where he lives.He looked to be in his eighties.The young man soon paid for his groceries and left, but not before catching my eye, smiling and saying goodbye.And then it was my turn to pay and pass on the pleasantries to the gentleman behind me.

As I left the store I was filled with an awareness of the people, all the different people, as they pushed their cars through the door. Empty carts coming in, full carts going out. People on the way home from work or school. All ages. Everyone going about the business of day to day living.

Well, you know what? I’m done arguing. Done trying to convince those on the other side that their guy isn’t the right guy for the job. That their guy is a first class (fill in your rude description here). It’s not that I don’t care. I do, passionately.  But at this point in the game, Minds. Are. Made. Up. Politics are emotional. Personal. Trying to change my mind, or me trying to change yours will only result in anger.I’d rather put my energy into recognizing what we have in common, not where we disagree.

Because soon enough it will be the day after the election. Then the month after.Then a year. And no matter what happens in Washington, no matter what the extremists say, we’ll still be buying groceries.
We’ll still be friends. Family. Co-workers. And we’ll still be smiling at strangers, giving them a hand if they need it.  More about Susan.