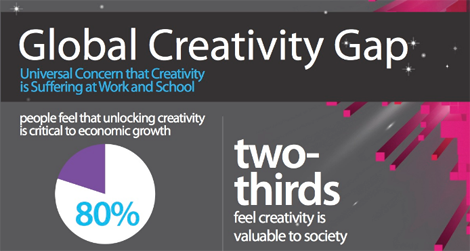 “Given that Adobe just released the latest version of its wildly popular Creative Suite line of products including Photoshop, Illustrator and InDesign, it’s no surprise the company would play up the need for a more hospitable climate for experimentation. But the study’s findings do indicate that people worldwide feel unfulfilled creatively.” ~ Mashable

In a world where we have been hearing for most of our lives that creativity is so important, it saddens me that so many don’t feel like they are as creative as they could or want to be.  They don’t feel like it is valuable gift at work, they lack the time to make it happen outside of work because we are so “plugged in” all the time and, the reality is, people just don’t always make it a priority.

For over a year, I took art classes from a wonderful teacher, Joanie Ford, and called it my “forced creativity time.”  I know that sounds negative but it wasn’t to me.  It was “forced” because I made a commitment by signing up and paying and it meant that I would have some pretty regular creative space to explore that I wouldn’t fill up with something else in my life.  The carpet that needs vacuuming, the dishes that need doing, the grocery shopping the family is begging me to do…probably much like your life.

Life has changed.  I don’t take classes as often but I do give myself permission more often to play with creativity than I have in a long time.  Even though much of my work involves creativity, it’s a different feeling than when I explore just for me…just for fun vs. for a job I’m working on.

The image above has a link so you can view the full infographic, if you’d like on Mashable’s site.  It has some interesting information.  I feel creativity is so important to our overall well-being, I’m committed to making time for it.

Do you feel it’s important?

Do you have opportunities to express yourself creatively?