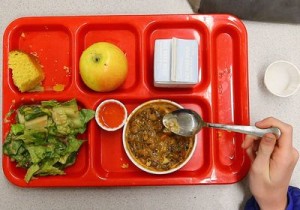 It was the beginning of 7th grade.  I was at a new school with students from various elementary schools in the area.  Luckily, I had a best friend so I was completely comfortable moving into this new environment – something that can be very difficult for me.

We didn’t have all the same classes, which was okay because had the same lunch period and would sit together every day.  Whoever got there first would grab a table and a couple of seats.

Until the day I got there just a little late.  I looked around for her in the crowded room and finally spotted her at the “popular” kids table.  I was so excited she had connected with someone in that group and thought what a great year this was becoming.

I walked across the lunch room, tray in hand.  When I got to the table, I realized there were no seats left.  I said something to her, which is a blur now but I don’t think it was much more than calling her name.  She ignored me…acted like I wasn’t there.  Others kind of looked my way but said nothing before returning to their conversations.  I tried again but got the same response.  I even put my hand on her shoulder, in case it was too loud for her to hear me, and still got nothing.

In the end, I walked away from the table, lunch tray in hand, head to the ground, and found another place to sit by myself.  I was devastated.  My heart was breaking.  Not just at the humiliation I suffered but also because I had lost my best friend…the one person I thought I could trust.

Sometimes these things can be resolved in a different way…people feel bad for what they did, apologies are made, etc.  Not this time.  It was really over and we never spoke again, even when we were outside of school with the neighborhood kids.  Unless you count the one time a bunch of us were playing kickball.  She was acting all high-and-mighty, in my opinion and I’d had enough.  I started screaming at her and we ended up in a physical altercation.  That was truly the end of it all.  Shortly after that, her family moved away and I never heard from her again.

My parents pulled me out of that school mid-year.  They feared I would become a 7th grade dropout if they didn’t make other arrangements. As hard as I tried, I wasn’t able to open up and trust someone else the same way I had trusted her.

Fast forward to mid-90s…the time frame is a bit blurry after all these years but the facts are not.  I was working a job and had been there for a few years and had worked my way up into new position.  I was supervising staff and planning programs for a local parks and rec.  My supervisor felt I needed to network more and really pushed me to do so.  In some ways, I was still that young girl in 7th grade being dismissed at the lunch table by her best friend and networking was so far out of my box, I couldn’t do it.  I avoided it in every way I possibly could.

I had just started to do a little bit of it, at his constant pushing, and although it was uncomfortable, it did feel like it was getting easier bit by bit.  Every year, parks and rec, has a state conference and it was my first year getting to attend.  My supervisor was also attending.  The first night, we went to dinner.  It was buffet style and we had trays, much like the ones I had used in school.  He asked me to join him at a table with a group of people he knew and, not really knowing anyone else, I followed.  When we got to the table, he realized there was only one chair left.  He turned to me and said he hadn’t seen these people in a long time and really wanted to catch up and would I mind finding some place else to sit.  I said no.  Tray in hand, head to the ground, I walked away like I was back in 7th grade again being dismissed by my best friend.  I ate alone and got back to my room as quickly as I could and stayed there for as much of the conference as I could.

It took a long time before I started networking, even though he kept pushing.  I would literally leave work for a meeting and half way there, turn around and go home.  I just couldn’t do it.  Eventually, I did get over all of it.  I started networking more and more and became more comfortable making conversations with strangers which I’d never been able to do much of before – I would literally answer questions and my mind would be blank in terms of anything else to add to the conversation – absolutely blank.

That supervisor moved on to a new job and while what he did at that conference was really painful for me, I will always be grateful that he pushed me to network.  When he left, they appointed me Interim Manager, much to my surprise, and eventually gave me the job permanently.  They even re-wrote the job description to fit my experience.   Not only that, I also overcame my fear of others and learned to really connect with a lot of great people and my life is filled with wonderful relationships.

Sometimes, painful experiences have a happy ending.  Mine sure did.