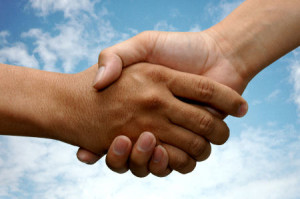 Throughout the past eight years (I can’t believe it’s been that long), I have been asked many times to do trades for my services.  In the beginning, I said yes a lot.  Yes because people wanted my help and asked.  Yes because people couldn’t afford to pay me and I wanted to help. Yes because I wasn’t strong enough to say no.  That’s the biggest reason I said yes.

You see, I was struggling financially at the point I decided to give up my W2 job and become self-employed full time.  I wasn’t in a position to be giving my time away without a financial payback.  My mortgage company didn’t take trades…should I have been doing it myself?  No.

Many times I didn’t even want or need what they had to offer in trade.  Not because it wasn’t good…it was just not something I needed or would have been willing to pay for if I’d had the money.  And now I had to not only find time to do their project but also to receive a trade so I could get “paid.”  And not just receive the trade but usually drive time to go someone to receive it.  It was exhausting.

It took losing my home to realize I was never going to become successful if I continued doing what I was doing and things had to change.  And, to be clear, financially successful is just one part of how I define success.  I want to be able to pay my way in life.  I don’t want to stress about bills or food or a few luxuries in this world.  That takes money.  That’s just a reality of life.  At least my life.  I know other people choose to build a different kind of life where very little, if any, money is needed and bartering may be the way they survive and possibly even thrive…but it isn’t my world nor a world I care to explore at this point in my life.

I had a client who, while she paid me to do her project, she spoke a lot about being broke and then about “hiring” people to do things for her along the way…I watched as she struggled doing what she could to move her business along…to raise the bar financially with no success.  She continued to struggle because the people she “hired” are actually the people she traded with.  And they also came from a place of lack, unfortunately.  They didn’t invest enough of their energy in the trade to even be able to look at the big picture.  Either because they were not truly invested in the trade or because they were more focused on getting what they wanted out of the deal.  Either way, it was a big loss, in many ways, for everyone involved.

Do I do trades now?  The truth is, yes.  Sometimes I do.  But very selectively.  It must be an even exchange, with closure around it, defined up front, and it has to be something I’d be willing to pay for or really love to have on my end.  And I never see something I want and then suggest they need a website or coaching done by me in exchange for that item or service.  If there was something I wanted AND they approached me about hiring me to provide a service, I might bring it up then but only then.  If they come to me and say they need something and they wanted to know if I would exchange, the answer’s going to be no unless I was already eying something they had to offer and, even then, I’m still selective.

I entered into that kind of agreement once and I never was able to collect on what I was supposed to get because her circumstances changed and it wasn’t available AND she wasn’t open with me up front about how it had to look…meaning she and I had to do it together and she was really busy and our schedules didn’t mesh at all.  And throughout the project, she pushed and pushed for more than what we agreed on up front.  The project tripled in pages and quadrupled in size over time.  I kept attempting to address it and she’d just tell me to add more time to my side for what I’d get.   Way more work and never received compensation.  I wanted what she had to offer but I didn’t understand the terms (which I wouldn’t have agreed to had I known).  Lose-lose for everyone.

So are trades wrong?  No.  It depends on your goals and how you view them and why you are doing them.  If you are doing them because you need something and feel you “can’t afford it”, I would say that isn’t a good place to do it from.  Are you clear up front about the terms?  And how do you feel when you do them?  Do they energize and excite you or exhaust you?  Pay attention to how you feel.

I’d love to hear if trades are something you do and how you ensure they are not coming from a place of lack so they can benefit you in moving forward.  What do you watch for? How do you decide if you will say yes or no?