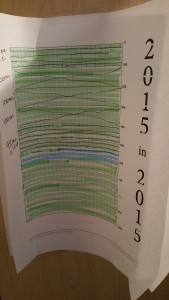 In 2015, I joined a challenge (you can download the 2016 info here too) and committed to eliminating 2,015 items from my home.  It was a big goal and not one I was sure I could meet.  There were sheets we could print out and hang somewhere to both keep track of our progress and also remind us constantly to get rid of stuff we didn’t need anymore.  I hung mine in my office and saw it just about every day and it did really help.

Come November, I was worried I wasn’t going to make it.  Like so many other goals and challenges, I often fall short…in a self-sabotaging way.  Heaven forbid I ever achieve something I set out to do…at least that’s how I see it although I know inside that I’ve actually achieved a lot of things I’ve set out to do.  Anyway, I had about 400 items to go and it felt a bit overwhelming and I wasn’t sure what I could get rid of that would get me over that hump of numbers.

I ended up not being as hard as I thought it would be.  I cleaned the kitchen out complete and that led to several items being crossed off, a few more clothing items purged between my husband and I and then a trip through the art supplies (that I rarely use) and sewing supplies (that are also rarely used) and I was good to go.

Even though I accomplished the goal, I’ve found it challenging to celebrate.  I did because I think that’s really important but, the entire time, I could hear this nagging voice in the back of my head telling me some of the things I got rid of didn’t count (say what??!!) so I didn’t really meet the goal.  I know that’s ridiculous because the objective was very clear and I followed the guidelines to a T.  But that “never enough” voice still rears it’s ugly head and reminds me that, deep down, perhaps, no matter what I do, it will never be enough.

For a moment, I’m going to put that voice away…and enjoy the accomplishment today.  Each time it attempts to speak, I will silence it.  I know deep in my heart that I am enough and what I did was a huge deal…one that many would not be able to do.

And after that moment is complete, I will spend another moment doing the same.  And I’ll continue on until the voice that says I didn’t do enough is silenced for good.  Because I am enough, simply because I’m here.  No amount of accomplishment or lack of accomplishment changes that fact.

I am enough.  It’s that simple.