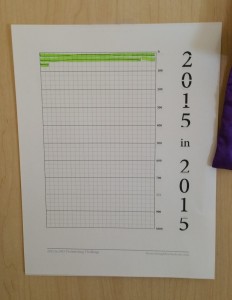 Through my process with SoulSpace, which you can see a little bit about my progress here and here and here, I found out about a website called Nourishing Minimalist and their annual decluttering challenge.  They’ve been doing the challenge themselves since 2008..meaning in 2008, they got rid of 2008 items from their home.  In 2009, they got rid of 2009 items and so on and so forth.

It’s now 2015…which means 2015 items in 2015 and I’ve signed up!  I’m nervous…I am only one person, after all, and many of those doing the challenge are families so in my head, I think it would be easier to get rid of that many items if there were more of us with stuff to get rid of participating.  So I asked my hubby what he thought.  He isn’t fully on board (he thinks it’s a lot to get rid of too) but I said I’d include his items on the list if he tells me when he gets rid of something so we are kind of doing it together but he doesn’t have to feel any pressure.

From that, I went to “well, I’m going to make mine discards look a little different from yours so I can see how many things I get rid of myself.” Then he asked if it was a competition and I had to explain that it wasn’t…it was truly just about me wanting to know how much stuff I could get rid of myself because I’m dedicated to this process of decluttering and simplifying my life and I realize it isn’t as important to him.

I really want to complete this challenge successfully and I know it’s possible.  It’s less than 40 items a week, if you look at it that way BUT someone just shared in the Facebook group that they are done…they’ve already discarded 2015 items!  Can you believe that?  That’s overwhelming to me but it also gave me hope that I can do this successfully and the courage to keep plugging away.

I started yesterday and have made a little progress as you can see from the chart.  After I took the picture of this chart, I had to leave for brunch with my family and a few errands.  I got the cleaning bug when I returned and did 336 more items!!  That’s 388, if I did my math right, total!  It feels so good to be doing this.  Only 1,627 to go…I’m sure I’ll be done in no time 🙂

What do you think of a challenge like this?  Have you ever done one before or considered doing one?